April 01, 2014
This must have been an interesting first meeting all those years ago.

"Look at the size of the fangs on that kitty cat," says Blorg, soon to be the late leader of the Ombosh tribe.

"That's one big cat," says Omgabish, his second in command and likely successor.  "What do you think they eat?"

"Anything they can catch, I assume," says Blorg.

"Bye," says Omgabosh, lacing up his custom made bush-hog Nikes and he was gone.

So was Blorg about one cat burp later.

Scientists excavating at the Schöningen open-cast coal mine in north-central Germany have discovered the remains of a saber-toothed cat preserved in a layer some 300,000 years old -- the same stratum in which wooden spears were found, indicating that early humans also inhabited the area, which at that time was the bank of a shallow lake.

The discovery sheds new light on the relationship between early humans and beasts of prey. It is highly likely that humans were confronted by saber-toothed cats at the Schöningen lakeside. In that case, all the human could do was grab his up to 2.3m long spear and defend himself. In this context, the Schöningen spears must be regarded as weapons for defense as well as hunting -- a vital tool for human survival in Europe 300,000 years ago.

Officials from the Lower Saxony heritage authority and archaeologists from the Universities of Tübingen and Leiden uncovered a first tooth of a young adult homotherium latidens in October 2012. Measuring more than a meter at the shoulder and weighing some 200kg, the saber-tooth was no pussycat. It had razor-sharp claws and deadly jaws with upper-jaw canines more than 10cm long.

The find shows that the saber-toothed cat died out later in central Europe than previously believed. Along with the sensational wooden spears, the same level has yielded bones and stone tools indicating that early humans -- probably homo heidelbergenis -- hunted horses and camped along a 100m stretch of the lakeside.

The new finds demonstrate that a long time before anatomically modern humans, homo sapiens sapiens have reached Europe some 40,000 years ago, early man was able to defend himself against highly dangerous animals with his weapon technology. The results of the researchers' study have just been published in a report by the Lower Saxony heritage authority, the Niedersächsisches Landesamt für Denkmalpflege.

Popular posts from this blog therewontbeanydoves.wordpress.com When developing a fictional character, you may not think about the character using large amounts of over-the-counter dietary supplements.  Especially a man who uses large amounts of workout supplements. While there has been widespread publicity on the dangers of the non-prescribed use of anabolic steroids, not much is said about legal, over-the-counter supplements.  Are there risks?  And if so, what are they?  There are several things the writer should consider. Supplement use is becoming an eating disorder with many men who use them to prepare for and recover from a workout. There is growing evidence of a link between muscle-building supplements and testicular cancer. There is evidence that over-the counter medications and supplements are the most common causes of drug-induced liver failure (a rare event, but still a risk.)  There is even evidence that, “certain popular herbal and dietary supplements can also cause liver damage,"
Read more

How laughter leads to love.

James Cagney rubs a grapefruit half in the face of Mae Clarke  in the classic flick, Public Enemy (1931), written by Kubec Glasmon and John Bright, adaptation for the screen by Harvey Thew.  Funny? Yes.  A rom-com?  Not really.  Great scene, though. Between romance novels and rom-com movies and television, there is a never ending, ever growing market for romance.  So what leads to romance?  Of everything, it is laughter.  Not at, but with.  So here's how it works:  Boy meets girl.  Boy gets the girl to laugh.  (Add a few tasty comedic or dramatic interludes), and viola, girl catches boy (after boy makes a complete horse's ass of himself,) and the happy couple goes giggling into the sunset.   Formulaic?  Very much so.   Greatly entertaining?  Very much so. Until kids, mortgage and divorce. . . but that's a story for later. Here's a report on laughter in romance, with a link to the full study in the attribution. *  *  *  *  * Laught
Read more 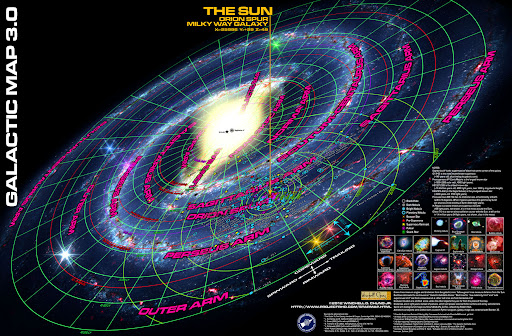 Source: www.wired.com Incredible, Detailed Map of the Galaxy by Winchell Chung showing the location of the Earth - between two arms of the Milky Way galaxy, and a few of the habitable planets we know of in our proximity. You'll notice that our planet is in relatively uninhabited area of space.  We're out in the boonies, far from potentially inhabited stars making it difficult to find us, and to reach us. You must have noticed the explosion of interest and speculation about alien life, and even alien life that has visited Earth across so many media outlets.  It's like the Pet Rock fad of our decade.  From a writer's viewpoint, this has led to some wonderful speculative science fiction from Jules Verne to The Hitch Hikers' Guide - literally thousands of titles by hundreds of authors - over the past century and a half. Have you wondered what research scientists think, research and write about the possibility of life elsewhere in the Universe?   I m
Read more 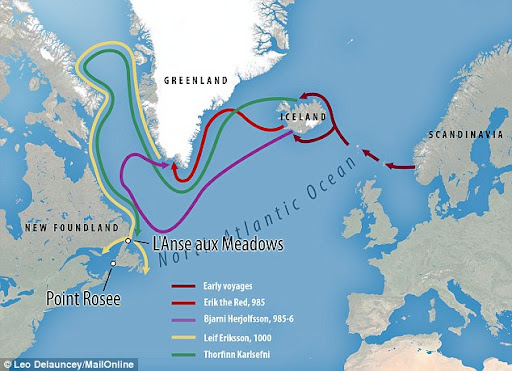 www.dailymail.co.uk    The new Viking settlement was found on the edge of Point Rosee in Newfoundland (illustrated above) 400 miles south of another site at L'Anse aux Meadows. They suggest that the Vikings' mastery of the seas allowed them to venture to North America.    There is so much speculation on possible discoverers of the Americas ranging from Polynesians, Japanese and Chinese to French Merovingians to a lost tribe of Israel, ancient Egyptians and sailors from the lost continent of Atlantis.  There are two statements that need to be said about this: An extended family group first crossed from Siberia to North America some 14,000 years ago, and survived, built sophisticated cultures and societies, and left undeniable evidence of their presence.  To give credit where credit is due, they discovered the Americas and no one else. Until solid scientific evidence establishing other groups as having visited the Americas is produced and peer reviewed, it rema
Read more

Source:    Discover Magazine Two things in this story attracted my attention. Mammals, especially us, have the ability to selectively forget things.  Since I tend to forget things I'd rather remember, the first isn't really news.  Well, it is.  It's good news that we can selectively forget things.  Now if I could just selectively remember things. And we're related to rats.  Slimey, stinky, vermin-infested, icky, blaaah rats. Upon further consideration, this is not even a slight surprise. *  *  *  *  *  * Selective amnesia: How rats and humans are able to forget distracting memories Our ability to selectively forget distracting memories is shared with other mammals, suggests new research from the University of Cambridge. The discovery that rats and humans share a common active forgetting ability -- and in similar brain regions -- suggests that the capacity to forget plays a vital role in adapting mammalian species to their environments, and that
Read more

Jim Fisher
A professional writer since 1983, Jim currently edits two primary blogs, Science News for Writers and Small Business for Real People. Jim also is a regular columnist on Creative Screenwriting while working on both fiction and non-fiction projects.